Financial Astrology - In the world of business and finance, the application of astrological techniques is extremely useful and is often referred to as astro economics.

Much of the information that is acquired is interpreted by using the same range of techniques found in other areas of astrology, however an economic perspective is the main focus.

All business activity is considered to follow repetitive patterns of alternating growth and activity. This type of astrological economic analysis tends to assist in making the most of these types of occurrences.

A number of the planets present influences that are of such a brief duration that they are usually considered to be of only minor importance. Although this is the case, the potential of all planetary combinations are still examined.

The planets which are considered to be crucial when considering the influences of astro economics, are Jupiter and Saturn. Their movements are slow enough to indicated major changes and yet fast enough to have an influence on daily or weekly situations.

Fluctuations and trends in international trade and stock markets have been linked to the cycles of Jupiter and Saturn. The planet Jupiter is often associated with expansion, growth, rising prices and inflation. The planet Saturn is considered to indicate caution, falling prices, recession and stability.

Financial astrology or astro economics tends to be most accurate in this type of comparison of planetary movements. It may be both useful and interesting when considering the fluctuations of stock markets, commodity prices and when dealing with various other types of business activity.

The correlation of business and planetary cycles is a fascinating branch of astrology. However, there is no simple method when personal or business finances are involved.

Back to Home Page from Financial Astrology 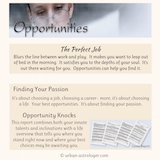 The Perfect Job
Blurs the line between work and play

It makes you want to leap out of bed in the morning. It satisifies you to the depths of your soul. It's out there waiting for you. Opportunities can help you find it.

Finding the Best Locations
To Enrich Your Life 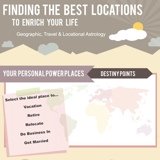 Where In The World
Should you be? Selecting Your Ideal Location To:


Where In The World 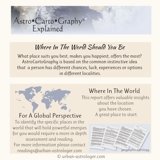 Want to get a better understanding of the influences of a location on your work and/or business.

This AstroCartoGraphy Report can help you achieve your goals.