Your online horoscope - you can get a taste of your own personal horoscope below by entering your birth data. First let's touch a bit on what a horoscope actually is. 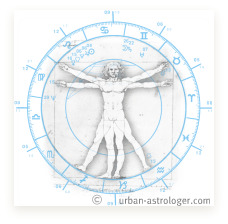 Throughout history the horoscope chart has gone through many different changes.

In ancient times, the horoscope was calculated only for the king or pharaoh of the land but was also considered to reflect on the entire population.

The oldest examples of horoscopes came from Egypt and Rome, where the information gained by direct observation was transferred to stone or clay.

The methods that were used simply displayed the necessary information and were not intended to reflect a picture of the actual heavens.


The word horoscope is actually derived from the Latin word 'hora' (hour) and the Greek word 'skopeein' (to view) which, interpreted, simply means to view the heavens at the hour of birth.

How A Natal Horoscope Chart Works

To construct a horoscope chart means to draw a picture or a diagram of the heavenly bodies for a specific time, such as an individual's exact time of birth. Modern astrology has a number of words that may be used instead of the word horoscope and these are chart, birth chart and natal chart.

An astrology chart is a diagram or map of the heavens as a newborn child would see it from their location at the time of their birth. However, the part of the sky which would be below the horizon would not be visible to the naked eye, but would still be included on the horoscope chart.

In the horoscope today, an individual's birth chart contains a small circle in the center, which represents the Earth and is considered the natural starting point since the Earth is where we are born and where we live.

The Pattern of the Sun, Moon and Planets

Astrologers analyze the pattern of the Sun, Moon and planets in relation to the Earth, from which they gain information about an individual's life and future trends. The calculation of the positions of these planets in the signs of the zodiac is the first stage in the construction of the horoscope chart. You can see some of this in your online horoscope below.

Houses of the Horoscope Chart

The circle representing the diagram of the heavens is divided into 12 pie-shaped sections known as houses. The second stage in the calculation of a horoscope chart consists of logically placing the planets in the 12 houses of the horoscope chart.

The houses are numbered from one to 12, starting at the eastern horizon, which indicates which sign of the zodiac should begin the horoscope chart. This zodiac sign is often referred to as the ascendant or rising sign of the individual.

These houses are divisions of a daily cycle in which the planets pass through them in a clockwise direction every 24 hours as a result of the Earth's rotation on its axis.

The zodiac signs are divisions of a yearly cycle that is a result of the Earth's revolution around the Sun.

Interpretation of A Horoscope Chart

In the interpretation of a horoscope today, within the individual birth chart, each house represents an area of life where the influence of the planets and the zodiac signs are expressed.

How To See Your Online Horoscope

To see your online horoscope birth chart fill out your birth data below. The text and information is displayed when you hover your mouse over the area of the chart. To get a personal comprehensive written report created just for you click here.


Back to Urban-Astrologer Home Page from Online Horoscope

Astrological Profiles For You

Astro-Talk Report
Your Astrological Life Portrait. This is one of the of the most advanced and comprehensive astrological interpretations.

Heaven Knows What
An intimate journey of self-discovery. If you don't know your birth time this is the choice for you.

Sky Within
A journey through the astrological aspects of your spirit being. Written in a gentle, personal style for you.

To see our full range of options go to our
Astro-Profles page.

What's In Your Future

Solar Return
What magic does your upcoming year hold for you. Don't let a birthday pass by without looking at your personal astrological Solar Return. Considered a sacred moment and a special time to set the stage for your journey through the next twelve months.

Lunar Return
Voted most useful, most informative and most fun! A guide of your personal "moon forecast" for the month to come.

Sky Log
An exceptional forecasting tool. Gives you the big picutre of what is happening in your year to come and then brings it down to the details.

To see our full range of options go to our
Astro-Profiles page.