Since this time Pluto has been the subject of much attention and mystery for astrologers.

Pluto is one of the smallest planets in our solar system, with a diameter of no greater than 4,000 miles. It is the slowest moving of the planets and is considered remarkable for the eccentricity of its orbit.

The number of years that it takes to travel through each sign of the zodiac can vary from 12 to 32. It takes approximately 248 years to make one complete rotation of the zodiac.

The Placement Of Pluto
In Your Birth Chart Is Important

Pluto's cycle is the longest of all the planets and few people live through more than one-quarter of its cycle.

However, the planet Pluto is so far from the Earth that its influence is considered to be mainly impersonal, unless it is prominently placed in an individual's birth chart. 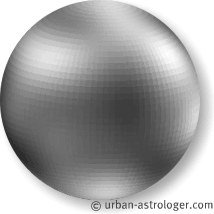 The effects of Pluto, like the other modern planets, Uranus and Neptune, are viewed as having more of a mass effect. The astrological significance of these planets have been deduced by careful observation of cultural trends that have occurred.

As Pluto remains for approximately 30 years in each sign, it's significance can only be given for the signs we have information about since its discovery in 1930. However since the significance of the sign position of Pluto is more historical and generational than personal, much research has been done.

The planet Pluto bears the name of the Greek God of the underworld and often this information has been associated with the astrological meaning of the planet.

Astrologers are beginning to associate Pluto with transformation. Many suggest that Pluto brings changes of a profound nature and can completely change attitudes., beliefs and behavior. It is often associated with the unconscious mind and compulsive, obsessive behavior.

The zodiac sign positions of Pluto are considered to possess great historical significance. Fundamental upheavals and drastic transformations in areas of human life and civilization are expected when Pluto travels through the different signs. Pluto passing through each zodiac sign is always considered to produce a change of a permanent nature.

When it comes to locality astrology - also referred to as relocation astrology, the planet Pluto has very specific influences. The various parts of the world that reflect your Pluto destiny points can be looked at to understand this planet's emphasis on your personal transformation.

The Astrological Glyph for Pluto

Pluto is the planet of death and rebirth. The underworld. Taboos. Eroticism and Shadow. Healing and regeneration.

The zodiac sign positions of Pluto are considered to possess great historical significance. Fundamental upheavals and drastic transformations in areas of human life and civilization are expected when Pluto travels through the different signs. Pluto passing through each zodiac sign is always considered to produce a change of a permanent nature.

If you want to have a quick look at how this will show in your chart you can check out our free horoscopes page which will give you a taste of astrology and how this planet works in your chart.

If you want your customized in depth written computerized reports you can explore the different options available in our shop.

Through the position of Pluto in your horoscope you can see where your power of transformation occurs.

Back to Planet Symbols page from Planet Pluto page

Back to Urban-Astrologer Home Page

Your Personal Mercury Forecast
This forecast is all about your communications and connections.

Your Personal Venus Forecast
This forecast is all about your love and values.

Your Personal Mars Forecast
This forecast is all about your drive and ambition.

Your Personal Jupiter Forecast
This forecast is all about your career and lifepath and when it is best to make relative decisions.

Your Personal Saturn Forecast
This forecast is all about your discipline and control.

Your Personal Uranus Forecast
This forecast is all about your innovation and insight.

Your Personal Neptune Forecast
This forecast is all about your imagination and spirtuality.

Your Personal Pluto Forecast
This forecast is all about your personal transformation.